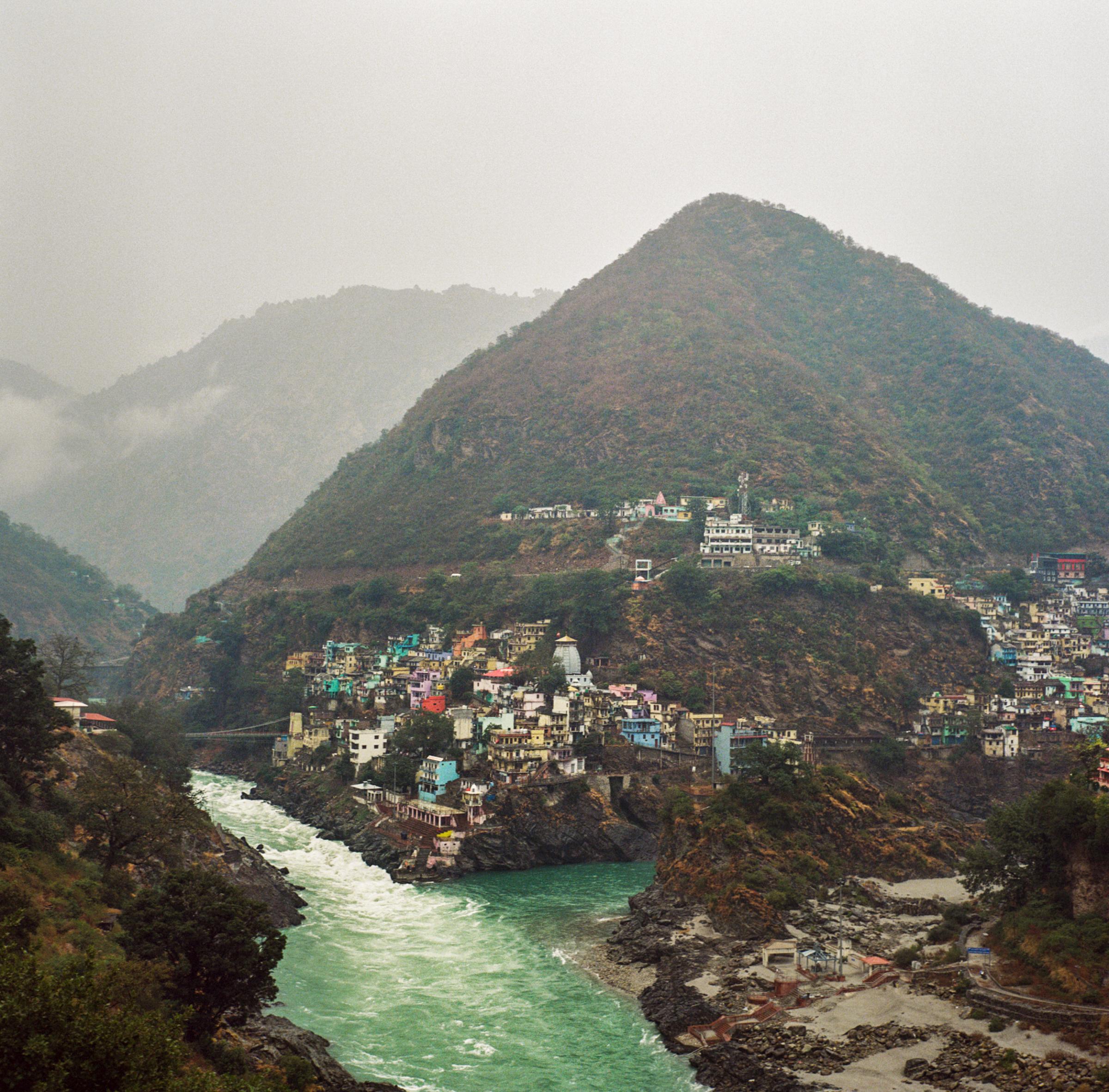 Two rivers, the Bhagirathi and the Alaknanda, converge in the western Himalaya to form the Ganges, at the Indian town of Devaprayag—Sanskrit for “holy confluence.” The amount of plastic waste flowing out of the Ganges is estimated at more than 6,000 tons a year. 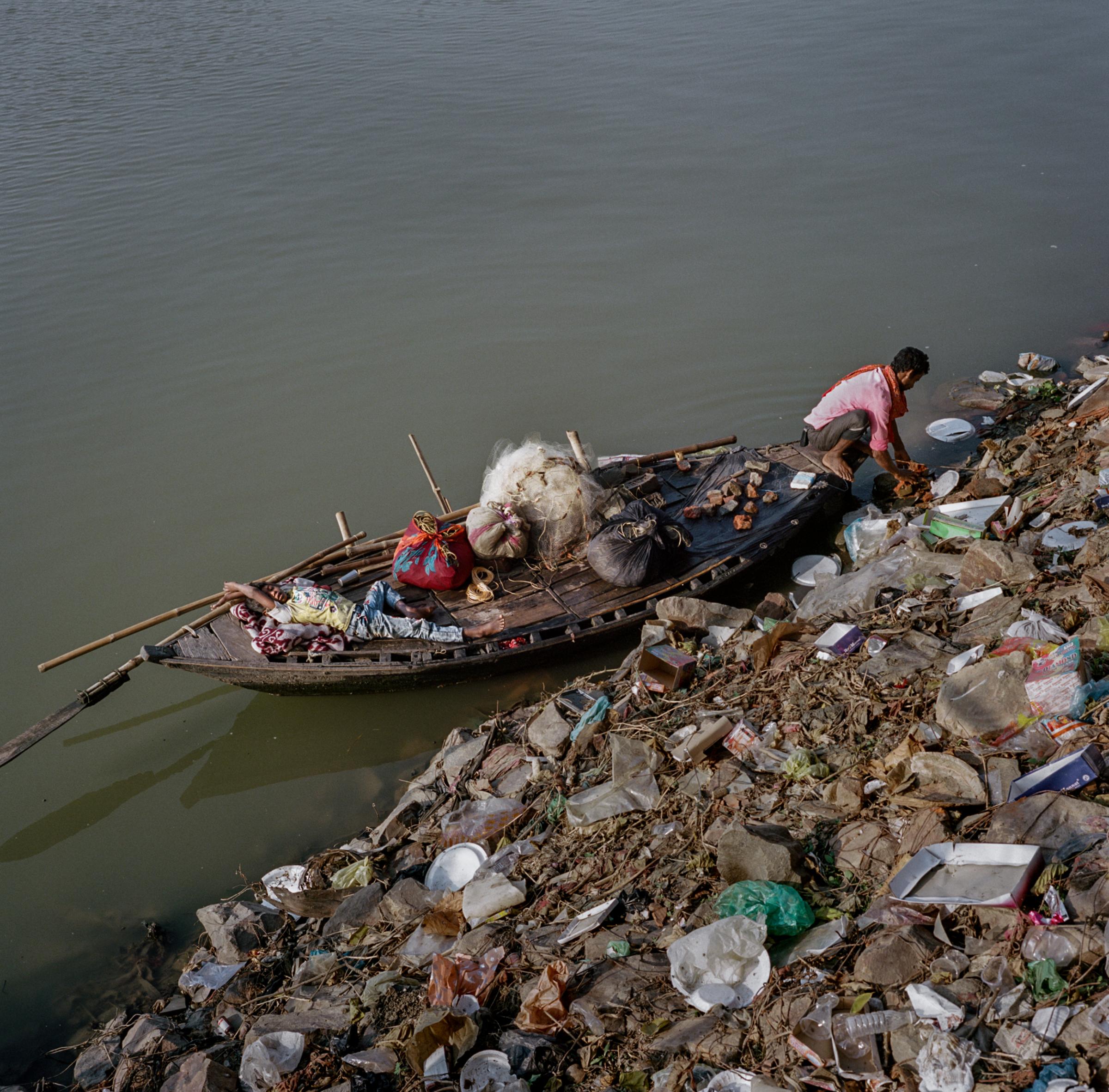 Fisherman Babu Sahni, 30, and his son Himanshu Kumar Sahni, eight, approach a bank on the Punpun River, a Ganges tributary. Throughout rural India, trash collection is rare, and ad hoc dump sites like this one are common. Most plastic waste in the ocean gets there by washing off the land. 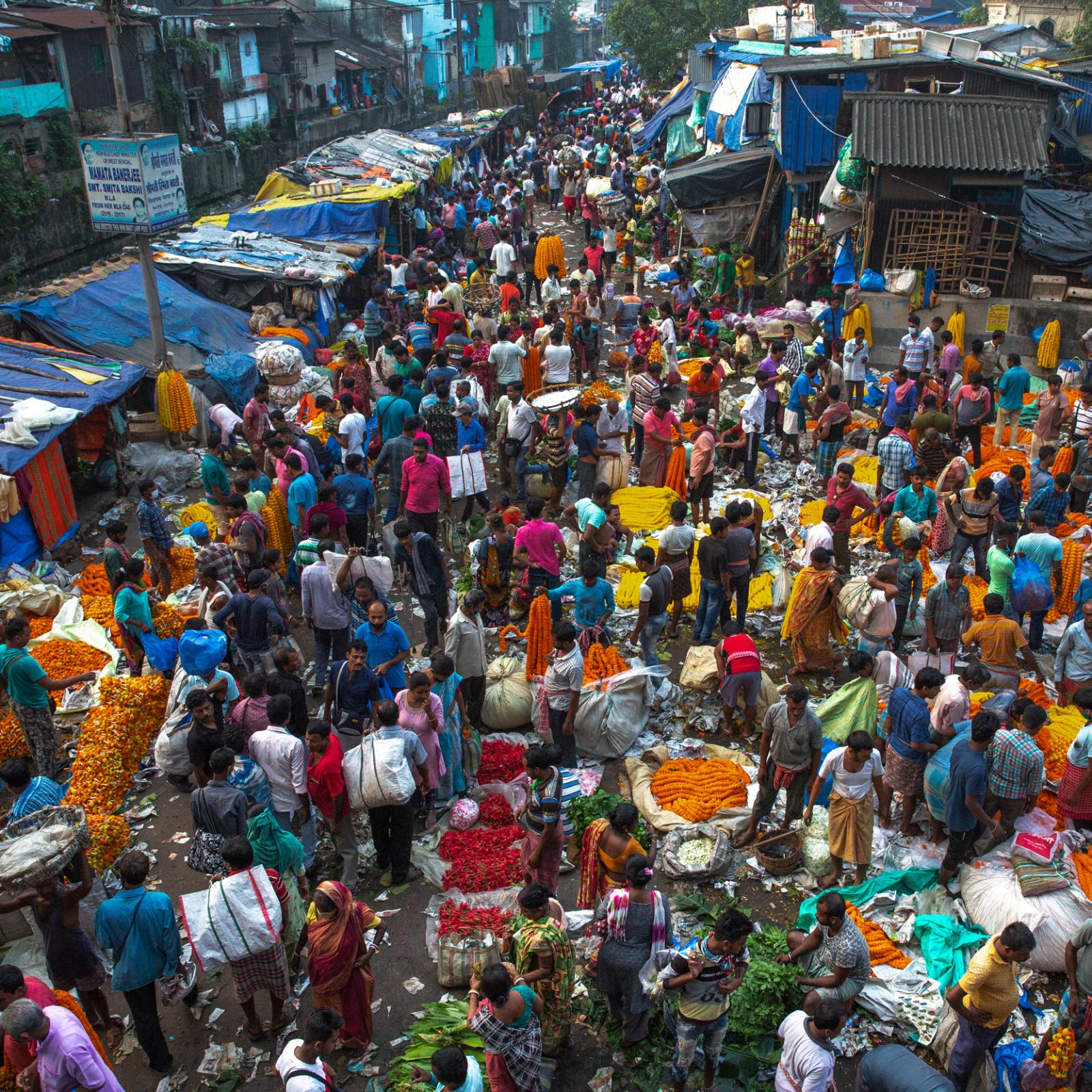 Kolkata’s Mullick Ghat flower market is jammed before the Durga Puja festival. In operation since the 1850s near the Hooghly River, a branch of the Ganges, the market now features plastic flowers as well as real ones. Both are sometimes scattered on the river as offerings. 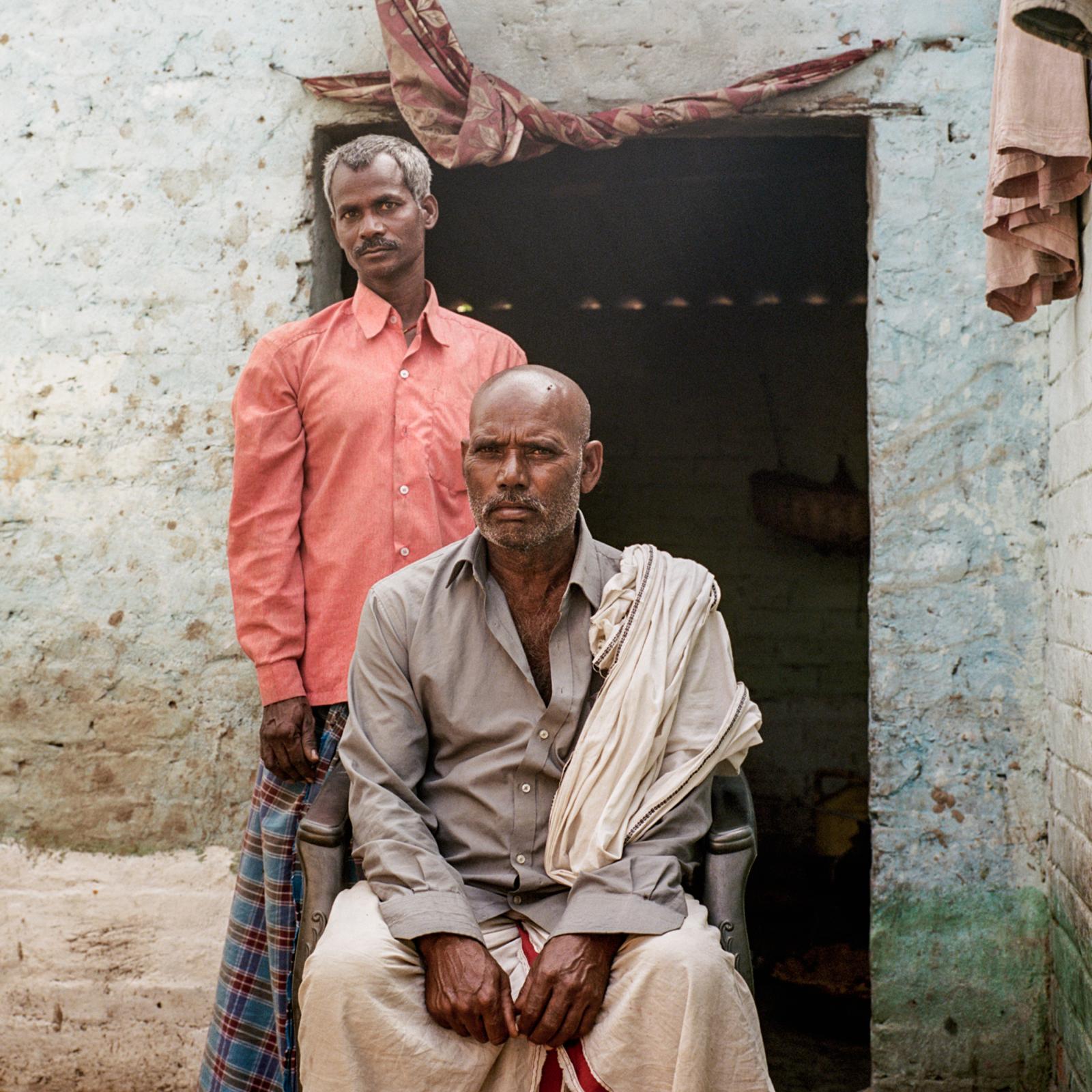 Sita Ram Sahni (seated), 70, and his nephew Vinod Sahni, 50, pose in front of their home on the Ganges’s north bank in Bihar. The Sahni family has fished the river for more than 50 years. Their nets, once made of cotton, are now made of blue nylon, a kind of plastic. 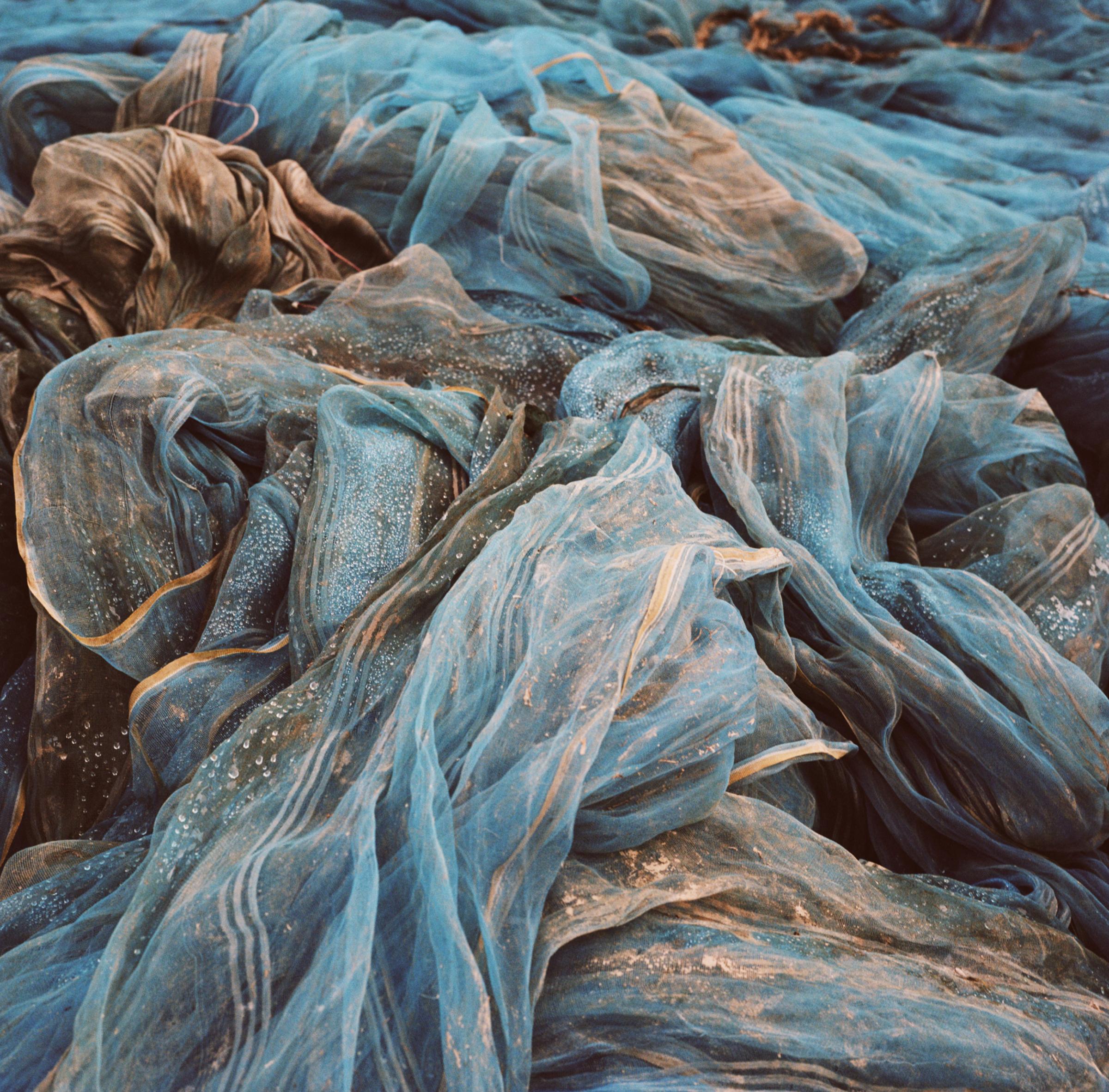 Nylon nets are commonly used—and frequently replaced—on the Ganges, one of the world’s largest inland fisheries. When lost or discarded in the river, the nets can entangle turtles, otters, and endangered river dolphins. Over time, they break down into microplastics. 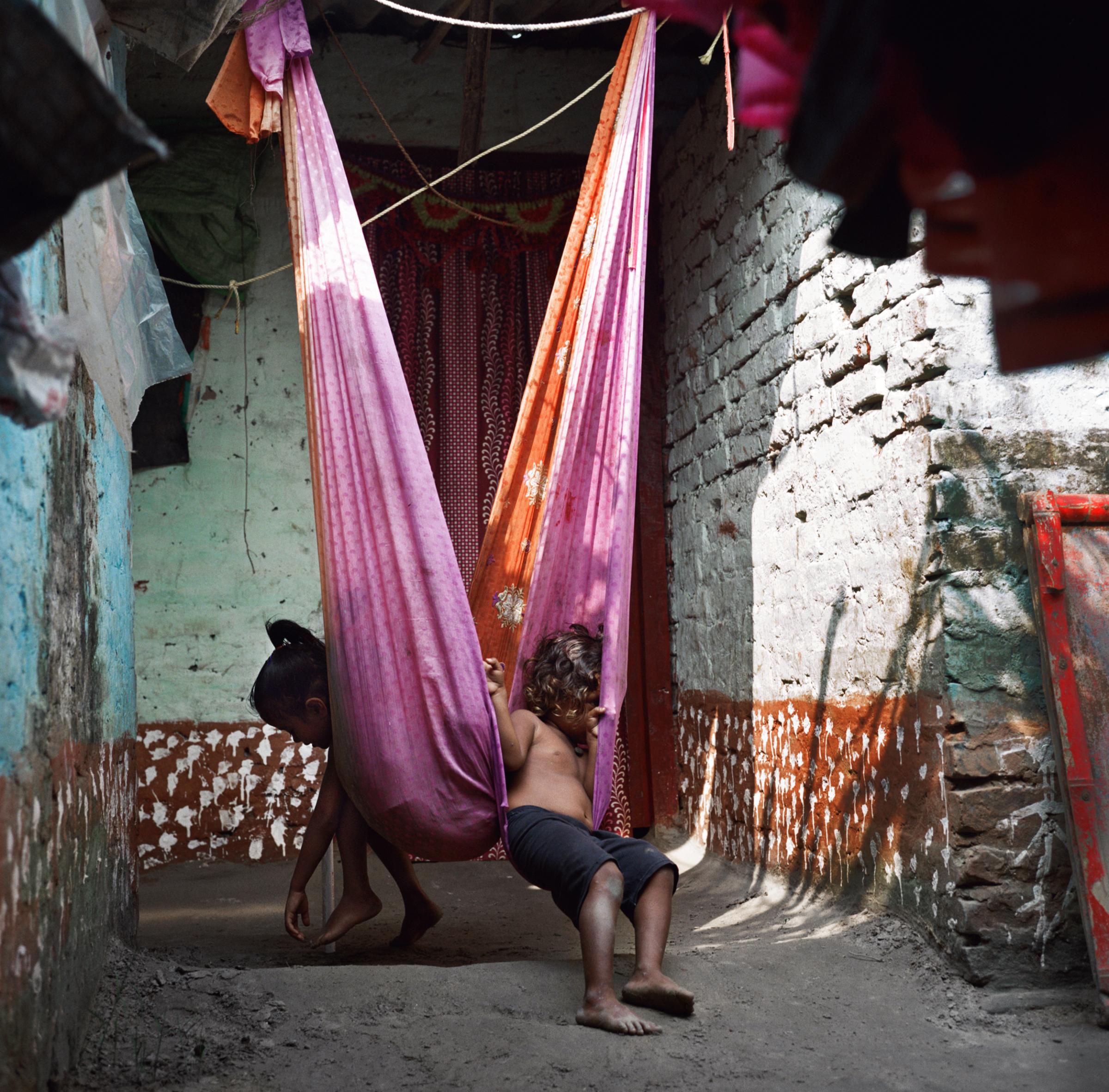 Sita Ram Sahni's grandchildren play at their home in a makeshift swing in the village of Rasalpur, Dharnipatti, Bihar. 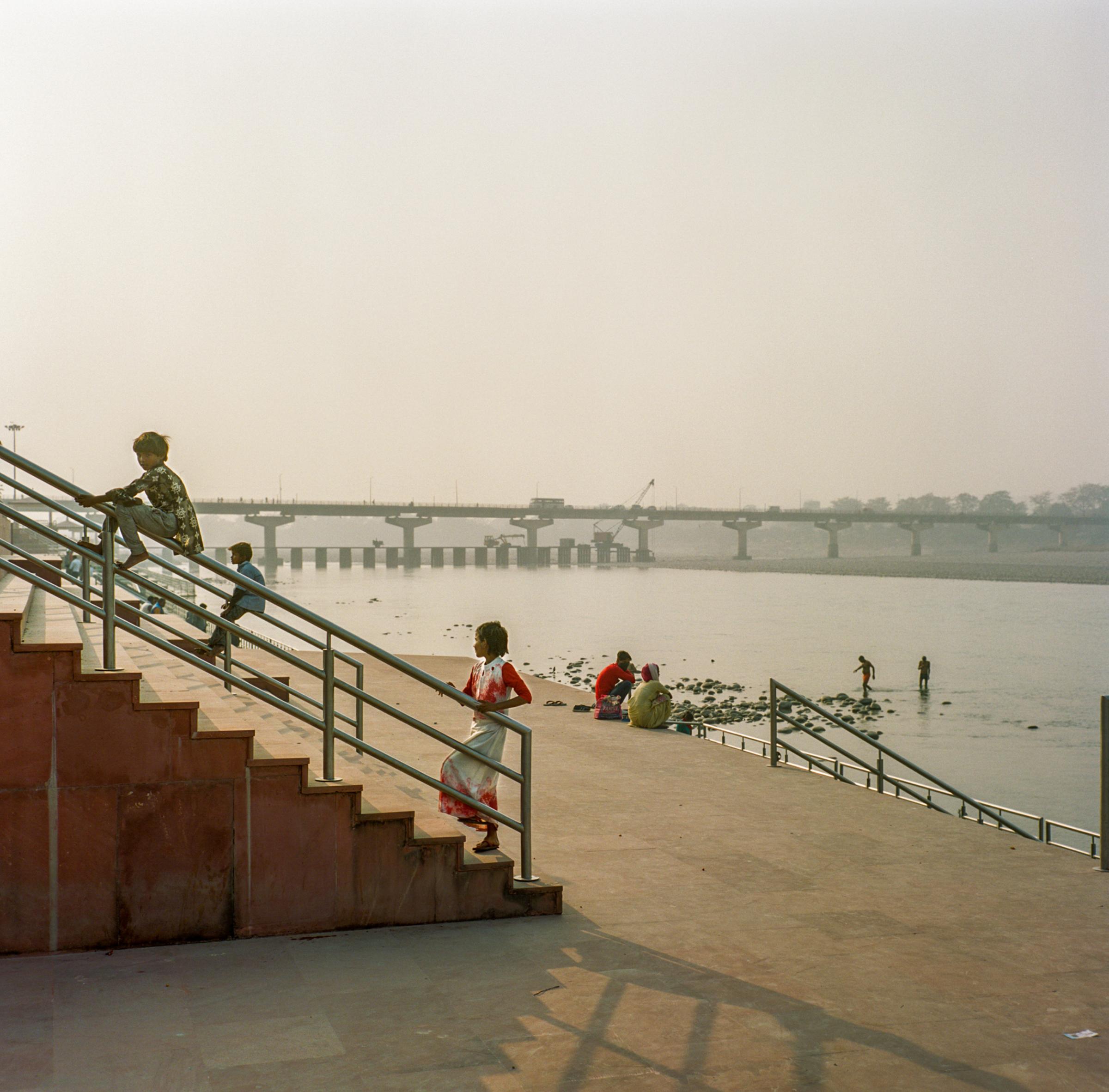 People in the Ganges Basin use stairways such as the Chandi Ghat in Haridwar to reach the river for a dip in what they see as purifying waters. Hindu belief in the river’s cleansing powers draws millions of pilgrims to the river every year, including during the COVID-19 pandemic. 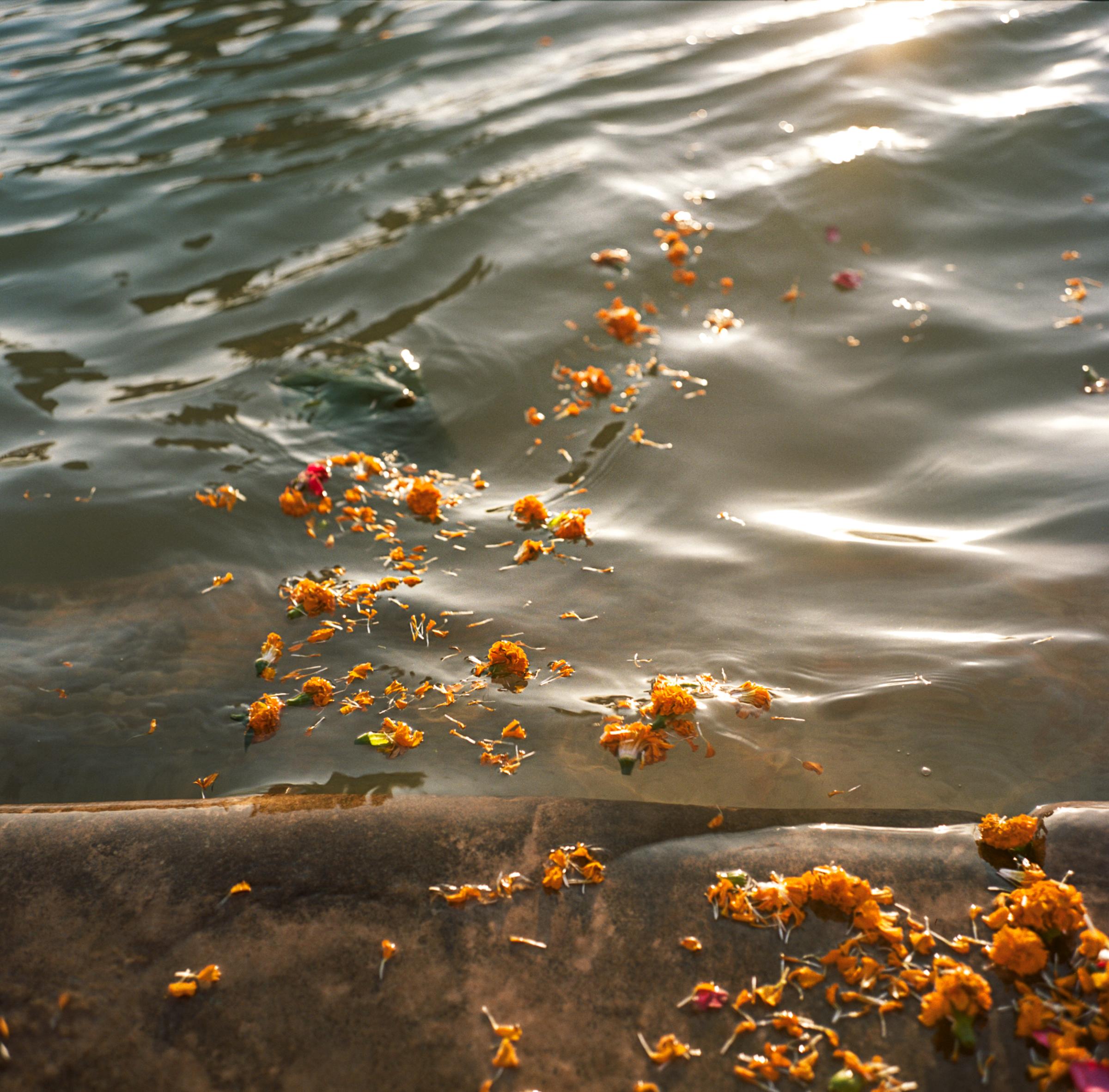 Flowers are offered to the river at Har Ki Pauri ghat in Haridwar, Uttarakhand at sunrise. 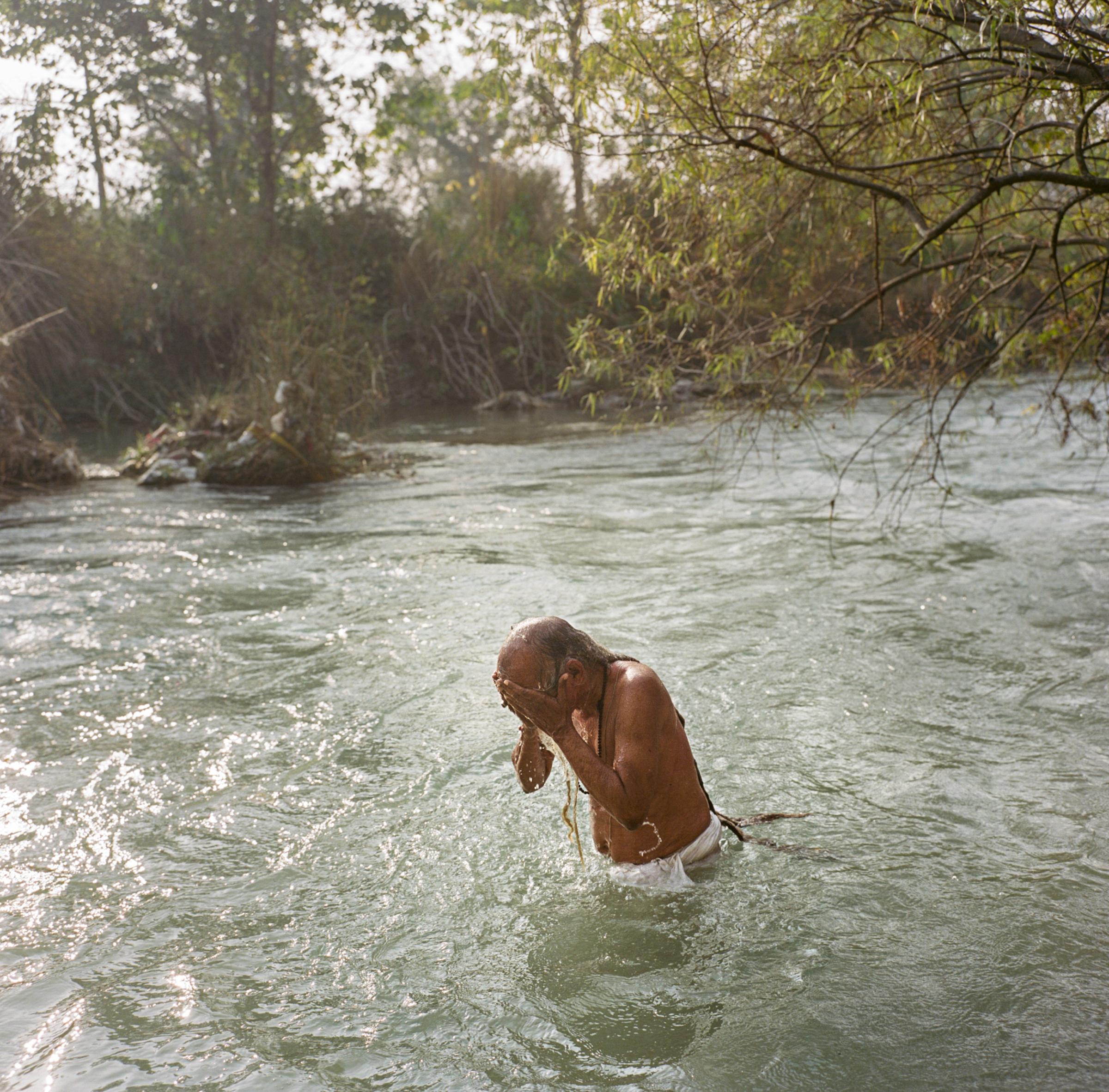 Swami Shivanand Saraswati, 75, bathes in the Ganges at his Matri Sadan ashram in Haridwar. He leads a long-running and ambitious campaign to protect the river from mining, new dams, and pollution. Plastic waste is just one of many pollutants to befoul it. 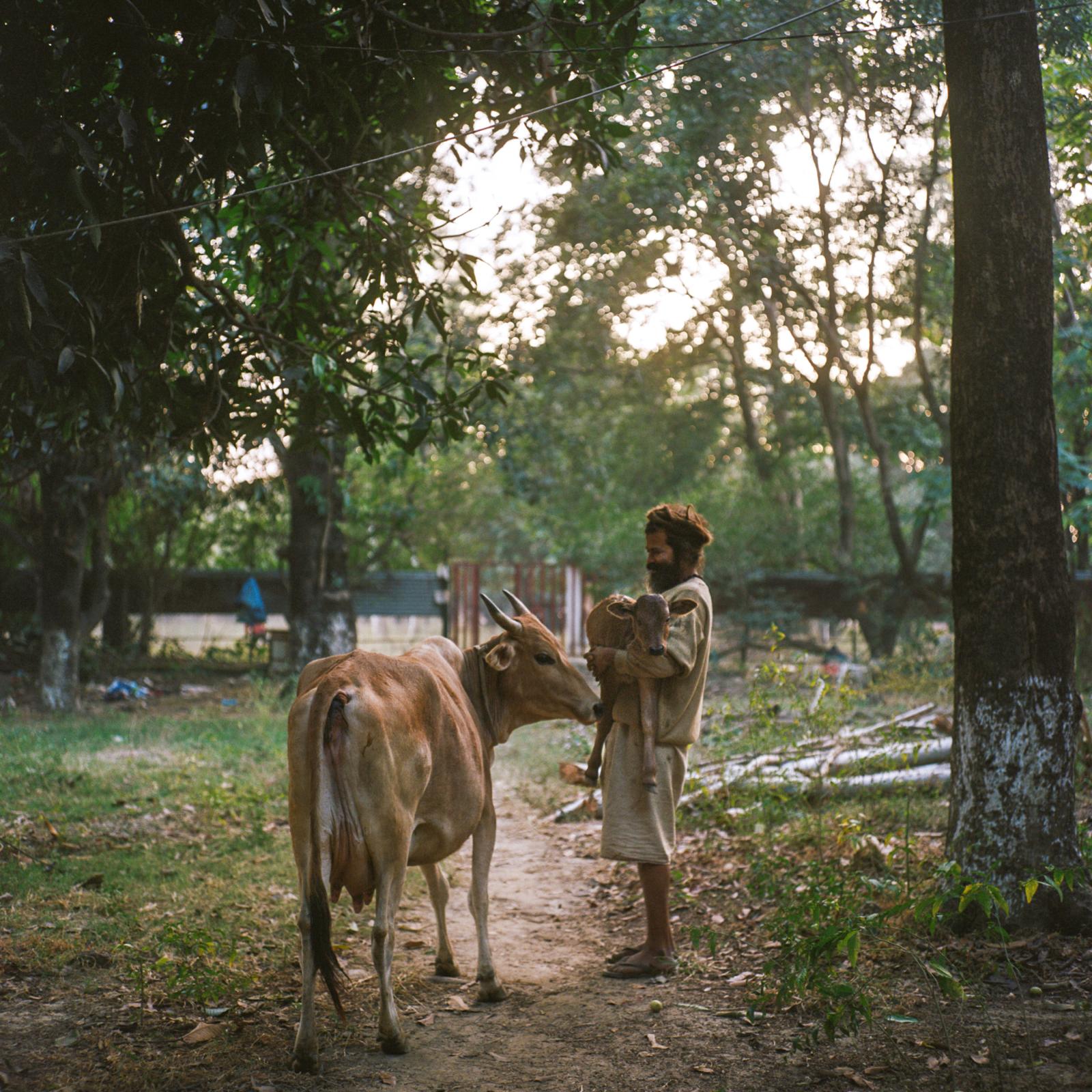 Brahmchari Dayanand, 40, holds a day-old calf at Matri Sadan ashram in Haridwar. Dayanand is a disciple of Swami Shivanand Saraswati, he spends each day with the cows at the ashram, cleaning them, feeding them, and milking them, he believes it is part of his spiritual practice, or seva. 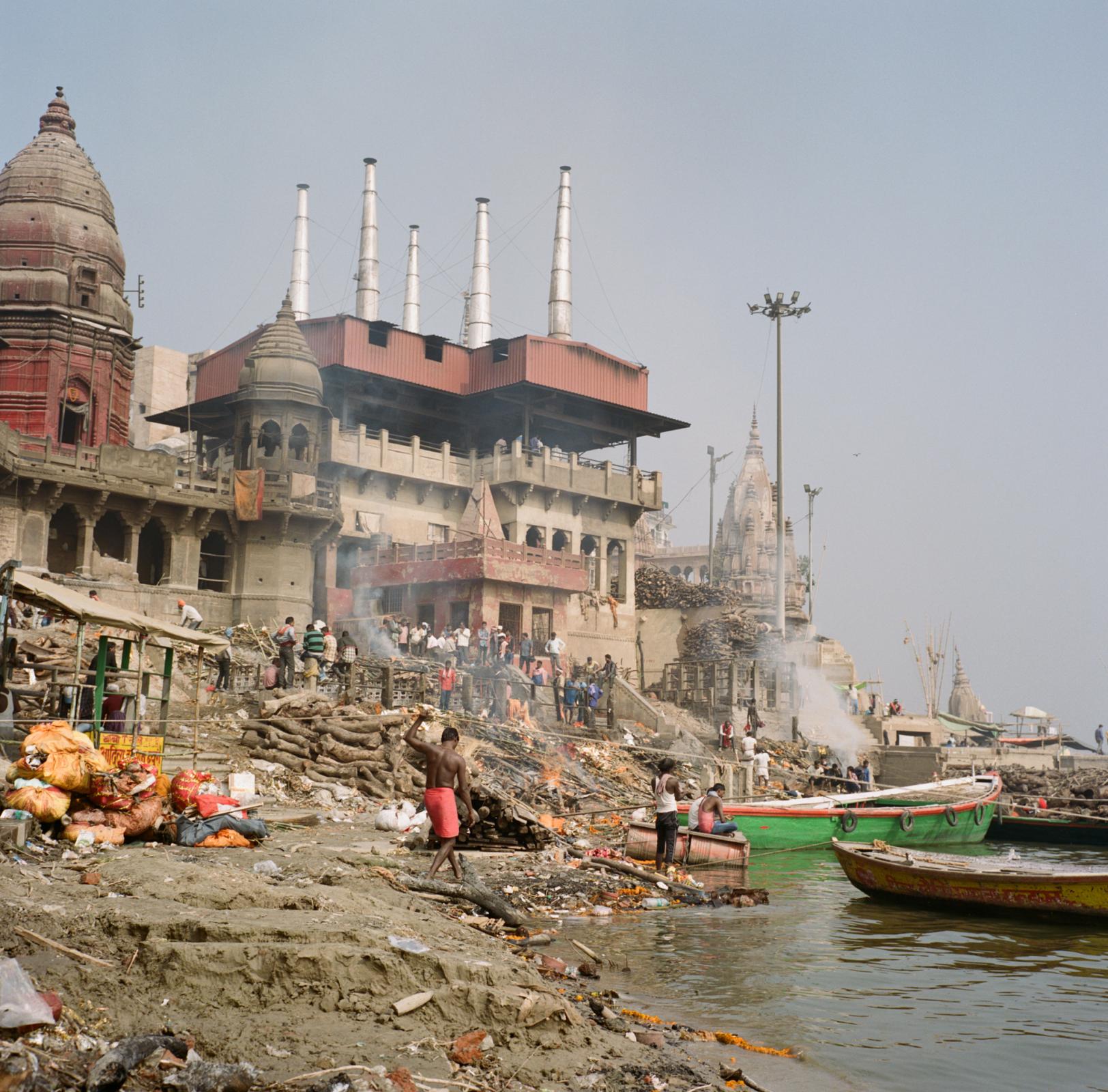 The Manikarnika Ghat, the main cremation site in the holy city of Varanasi, runs 24 hours a day. Family members often release floating offerings, including plastic trays, candleholders, and small vases, into the Ganges. 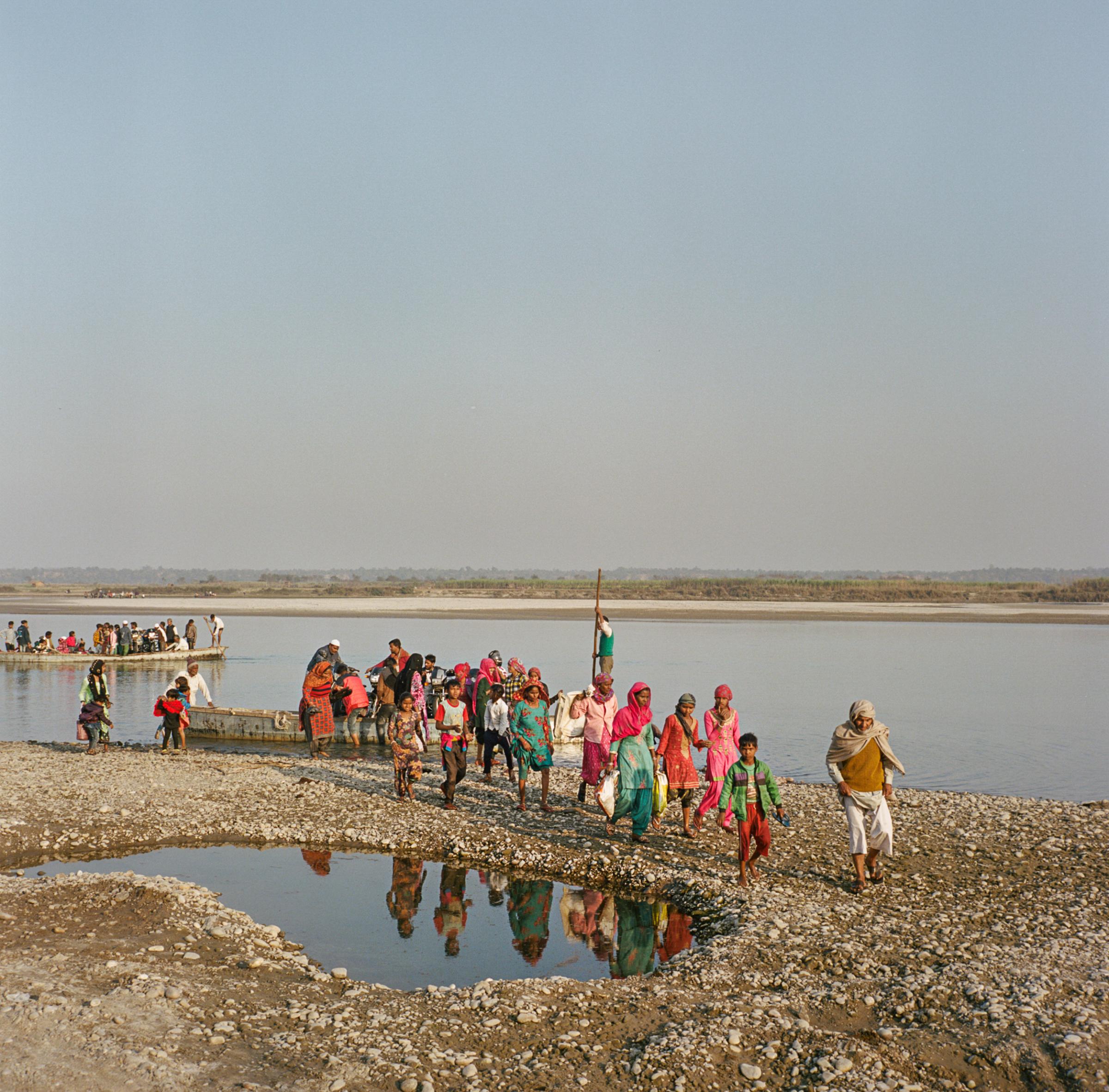 People wait to cross the Ganges river from the state of Uttarakhand to visit a mosque in Uttar Pradesh, a large crowd travels each Thursday evening around sunset. 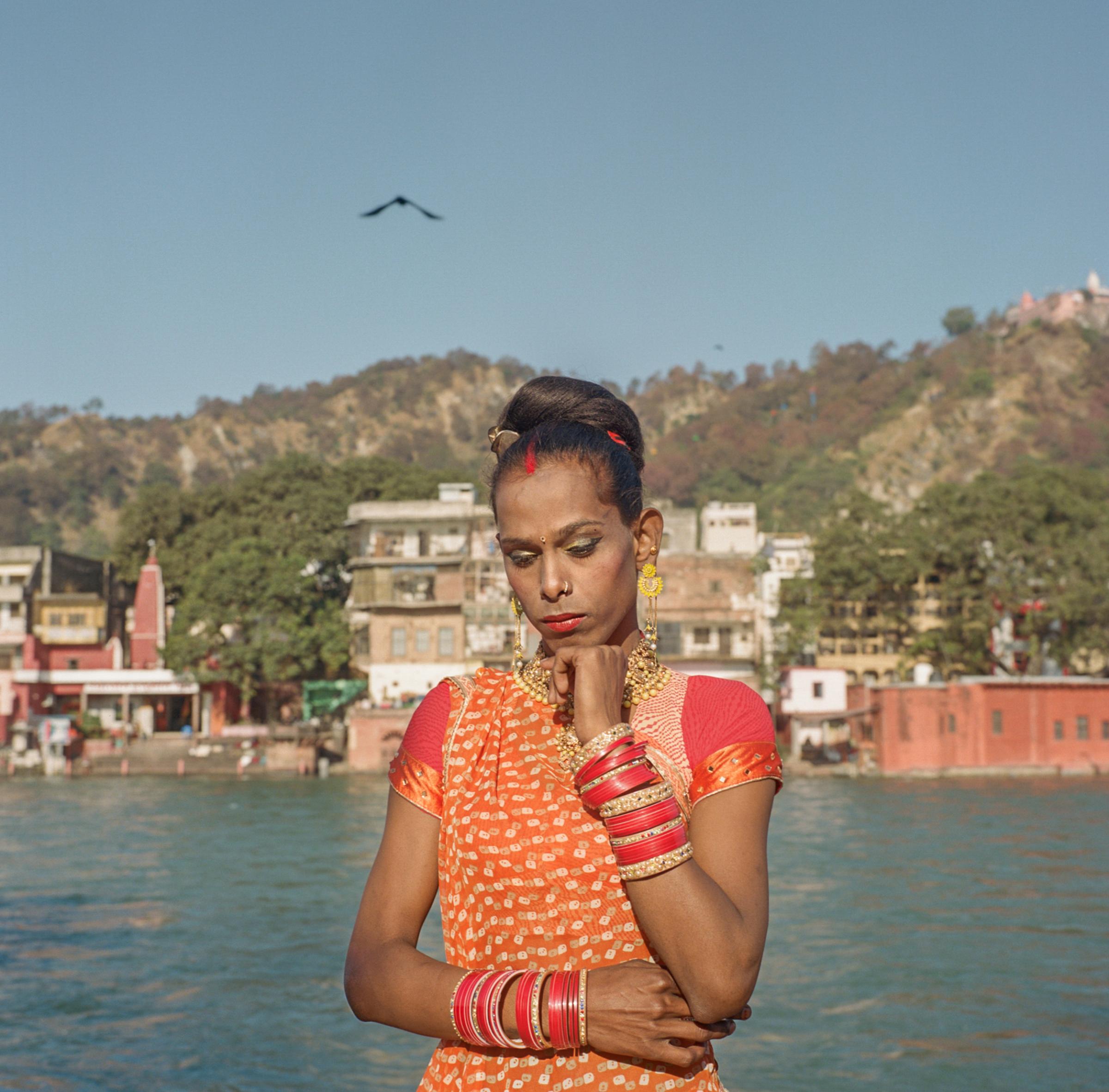 Kushi, a 23-year-old hijra, poses for a portrait along the Ganges river in Haridwar, Uttarakhand. 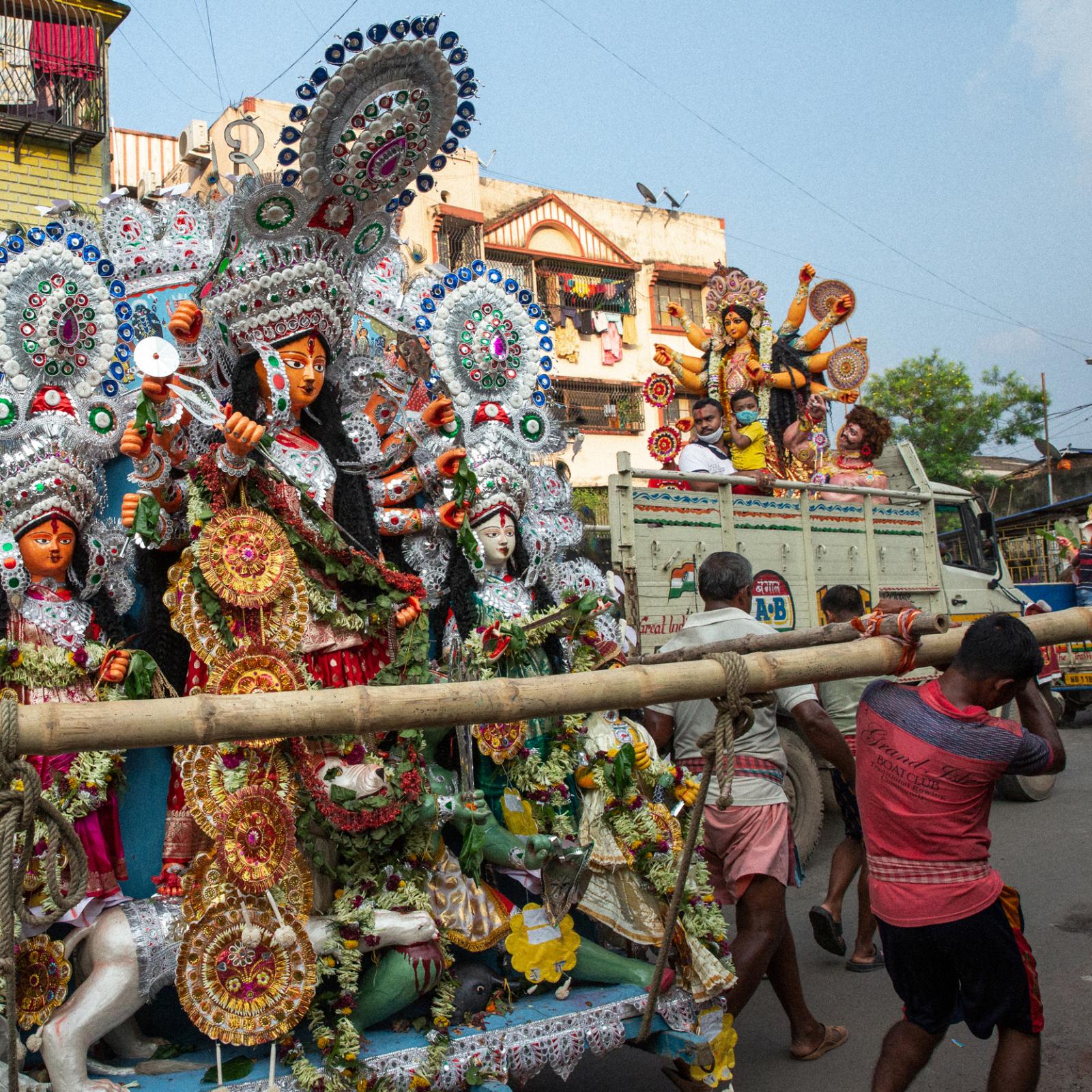 Celebrants transport a likeness of the goddess Durga through the streets of Howrah, near Kolkata, during the Durga Puja festival. It ends with the immersion of the idols in the local river—the Hooghly in this case. Hindu rituals often involve offerings to the Ganges or its branches. Plastic is banned now in many temples. 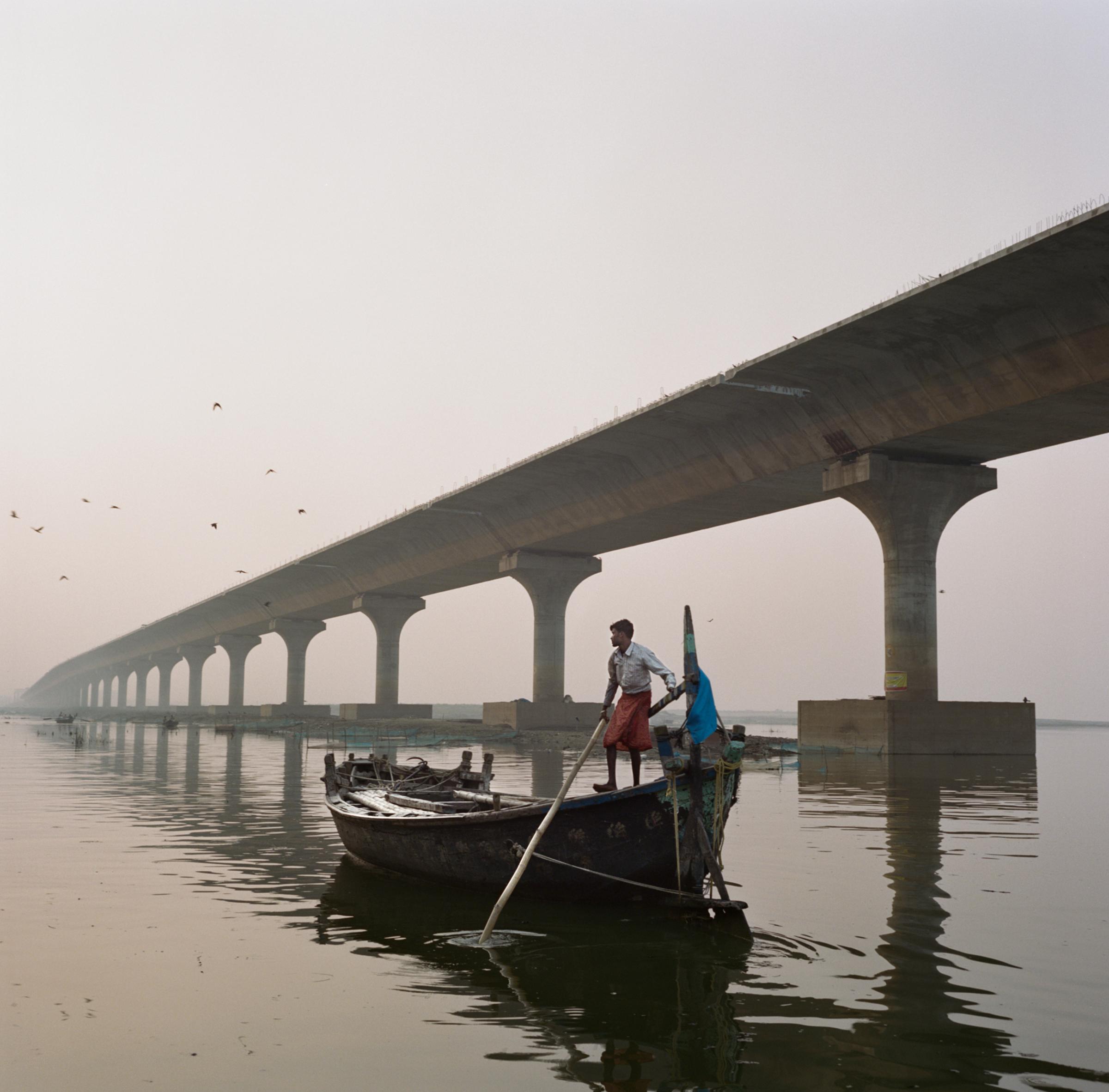 In Patna, a boatman surveys the Ganges near a recently constructed expressway. The country’s rapid development has fueled demand for plastics, and its plastics industry is now one of the world’s largest.
"The Ganges River is one of the world’s largest, worshipped by a billion Hindus as Mother Ganga, a living goddess with power to cleanse the soul. The headwaters emerge from the Gangotri Glacier high in the western Himalaya, just a few miles from Tibet, and then drop down steep mountain canyons to India’s fertile northern plain. There the river meanders east across the subcontinent into Bangladesh, broadening as it absorbs 10 large tributaries. Just after it merges with the Brahmaputra, the Ganges empties into the Bay of Bengal. It’s the world’s third largest freshwater outlet to the ocean, after the Amazon and the Congo. It supports more than a quarter of India’s 1.4 billion people, all of Nepal, and part of Bangladesh.

So sacred is the river that its water, Ganga jal, has been hauled home in jugs by conquering armies and guidebook-toting tourists. Seventeenth-century traders believed it stayed “fresher” on long sailing voyages than water drawn elsewhere. Sir Edmund Hillary, who conquered Everest, was a fan. You can buy it today in blue bottles from Walmart.

Sadly, the Ganges also has long been one of the world’s most polluted rivers, befouled by poisonous effluents from hundreds of factories, some dating to the British colonial period. The factories add arsenic, chromium, mercury, and other metals to the hundreds of millions of gallons of raw sewage that still flow in daily. Plastic waste is only the most recent insult" writes Laura Parker.

In 2019, I joined a female-led research expedition who set out to study how, why, and what types of plastics were getting into the Ganges river and eventually into the ocean. From nylon fishing nets, to environmental activists trying to protect the river, I spent three years documenting this complex topic, and efforts to mitigate future harm. See the story published in National Geographic